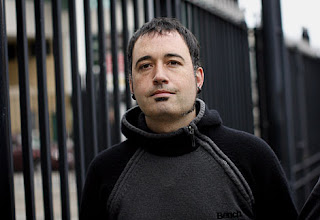 At the request of the Spanish authorities Arturo “Benat” Villanueva was arrested last Wednesday by the Extraditions Team of the PSNI. The arrest happened at 8am at his home. The PSNI officers involved in the arrest were correct throughout the arrest and the custody at the Musgrave barracks.

40 people supported Benat inside and outside the Court buildings. After a hearing before Judge Burgess and having previously agreed with both the Crown prosecution and the PSNI Benat was released on a £5000 bail, curfew at home from 9pm to 7am, he has to remain within the six counties and has to sign at a barracks every day once. A full hearing will be held on the 13th of May at the Lagan Court in Belfast.

As we’ve reported many times Benat’s case is not an isolated one, it’s part of a broader pattern of repression against the Basque Country . Over the last decade newspapers, political parties, youth groups, cultural associations...have been banned and their members arrested.

Benat has been living and working openly in Belfast for the past 5 and half years. He said: “I’ve made this country my home, made many great friends and become a proud part of a very strong community. I’d like to take this opportunity to thank everybody for the welcome and support they’ve extended to myself and the Basque people over the years.”

Between Tuesday and Wednesday Basque political refugee Inaki Etxeberria was arrested in Venezuela. Very little information has come out surrounding this arrest.

The Basque pro-independence movement spoke out against the arrests and branded them as political and reflection of the overall political situation of repression in the Basque Country. The pro-independence movement asked other governments not to follow the Spanish authorities estrategy. Finally expressed their solidarity with the arrested and thanked those in Ireland, Venezuela and the rest of the world who have welcomed and supported Basque refugees along the years.

The Belfast Basque Solidarity Committee has stated that the arrest of a member of the Basque community , living in Belfast, is yet more evidence of the Spanish authorities attack on Basque Civil society.

Speaking on Wednesday a spokesperson for the group, Kevin Morrison, said:
“The arrest of a member of the Basque community, living in Belfast, Arturo “Benat” Villanueva, is yet more evidence of the continuation of attacks by the Spanish government on Basque civil society.

“The extradition warrant issued by the Spanish authorities is accusing Arturo Villanueva of membership of Segi, a youth organization banned in 2005 in a series of draconian clampdowns on Basque cultural and societal organizations.

“Since then newspapers and radio stations have been closed, human rights groups have been banned, and Batasuna, the Basque pro-independence party has been proscribed and its leadership arrested and imprisoned. All of these are blatant infringements of basic human rights and the freedom of speech within the European Union.

“This attitude of the Spanish government has recently been described by UN Rapporteur, Martin Scheinin as ‘too broad’ targeting ‘groups that have nothing to do with violence’.

“Benat has been living openly in Belfast for over five years and now has a life here.. We are a calling for immediate dropping of this case and an overall end to such repression of Basque civil society.”

The EPPK/Basque Political Prisoners Collective released a statement on the 20th anniversary of the implementation of the dispersal policy by the Spanish government followed after by the French authorities. Since 1989 hundreds of Basque prisoners have been scattered in dozens of prisons across Spain and France. Nowadays 765 Basque political prisoners are imprisoned in 85 jails.

In the statement the EPPK says they won’t allow to be used to damage the Basque National Liberation Movement. They called upon Basque society to continue working against the dispersal policy.

The EPPK goes on to ask the French and Spanish government to take the prisons policies out of the confrontation lines and take the path of common sense.
Posted by Irish Basque Solidarity Committees at 2:45 pm No comments:

A huge demonstration crossed the artificial border between the southern and northern Basque Country on Aberri Eguna/Homeland’s Day on Easter Sunday. Nationalists of different backgrounds responded to the call from the National Debate Forum.

Most of Basque nationalist parties and trade unions had previously showed their support for the national demonstration which had the slogan of “Time for change, time for sovereignty. We are a nation, the seven (provinces), one.”

Speakers called for a united strategy between all nationalist organizations and highlighted the importance of the day’s rally in that way.

In a statement released on Aberri Eguna/Homeland’s Day ETA said that the Basque National Liberation Movement is ready to agree with other Basque democratic parties a commitment and a strategy for political change and democratic solution to the conflict.

The political change must be based on the right of national self-determination. ETA added that while a thick wall against repression is not built and clear commitments to achieve a democratic framework do not exist, the circumstances are not right for anyone to ask them to stop the armed struggle. According to ETA is time to go from words to actions. 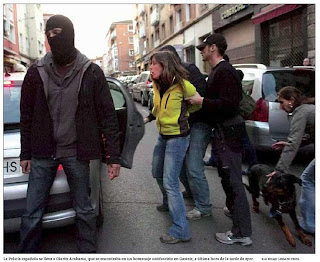 Another three activists were arrested last Saturday in northern Catalonia by the French police who were helped by Spanish police. Immediately afterwards, another 6 people were arrested in the Basque Country. All of them have been accused of being members of ETA.

Information about plans to attack the Spanish king or other top Spanish authorities with missiles by ETA emerged in the past few days after documents were translated. 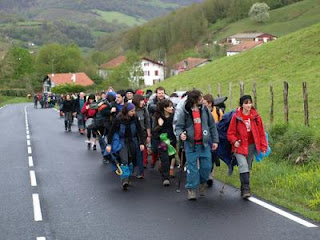 For three days over Easter 2,000 Basque pro-independence young people hiked across the Pyrenees with the slogan “Join the independence”.

They had to confront extreme weather conditions such as wind, rain, snow and hail, but they finally arrived to Donibane-Garazi/St Jean de Pied-de-Port where different events such a massive dinner, rally and music festival were organised.

Youth left organizations from across Europe like Ógra Shinn Féin and South Africa took part in an International Youth Meeting organised on the previous days.

The Basque political prisoners’ relatives’ association Etxerat organised dozens of events across the country during last week to denounce the consequences of dispersal policy against their love ones.

20 years ago the Spanish government began to scatter Basque political prisoner all around the peninsula. The move was followed by the French government soon after.

Nowadays 765 Basque political prisoners are dispersed in 85 prisons in France and Spain. This cruel policy force their relatives and friends to have to travel every weekend hundreds of miles for a 40 minutes visit. 16 relatives and friends have been killed in road accidents on their way to visits, 267 serious accidents and hundreds of injured people and millions of euros spent are some of the shocking statistics.

200 people packed the Conway Mill events hall last Good Friday in the 6th Irish Basque Night. The fundraising and solidarity night was full of music with Eric Noon & The Future Gypsies and DJ Red Rasta Sound System, speeches and a very emotional video recorded by Basque political activist Inaki de Juana who is fighting extradition in Belfast and couldn’t attend due to the bail conditions.

The organisers, the Belfast Basque Solidarity Committee wants to thank all who attended for their help and support throughout the night. 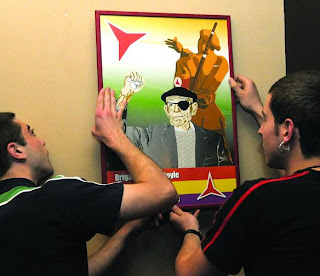 100 people filled the Paddy Shorts pub in Gasteiz/Vitoria last Saturday to pay tribute to the last Irish member of the International Brigades who died recently. There were speeches, live Irish music and tributes until several undercover Spanish policemen armed with guns and wearing balaclavas entered the bar and kidnapped two people. Those present, overcoming the initial shock, attacked the Spanish police cars and smashed some windows. Following the attack, it later emerged that the arrests were linked to a broader police operation against ETA.
Posted by Irish Basque Solidarity Committees at 8:57 pm 1 comment:

MASSIVE SUPPORT IN FAVOUR OF THE BASQUE LANGUAGE

-Popular walkathon in favour of the Basque language begins. 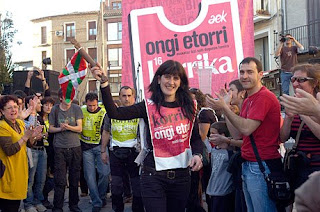 Korrika (www.korrika.org) is the name of the most massive event in the Basque Country. Every two years around 600,000 people take part in this walkathon to raise awareness and funds if favour of the national language. 10 days non-stop and 2,500 kilometres, all around the Basque Country, that shows the importance and support of euskara, the Basque language. Korrika is organised by AEK, the adults Basque language teaching grassroots movement. AEK has some 100 schools and 600 teachers across the country.

Korrika began last Thursday and it’ll finish on Saturday. This year’s slogan is “Welcome to the country of us who want to live in Basque”. A mini Korrika has been organised in Dublin for this coming Saturday.

Eight young people were arrested in the early hours of Tuesday in Hernani, near Donostia/San Sebastian. The Spanish authorities are questioning them on suspicion of being involved in recent acts of sabotage. 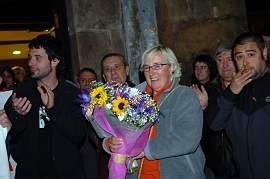 Eight pro-independence political activists were released on bail last week after spending two months in prison for trying to stand in elections. They were arrested on the 23rd of January by some 300 Spanish policemen just a few weeks before the elections in the western Basque Country. The Spanish authorities accused them of organising a new pro-independence election platform, Democracy 3 Milion.

Ultimately, the platform was banned. Police attacked their election campaign and harassed those trying to put up posters or deliver ballots. Despite all the repression 100,000 people (8% of the vote) voted with “illegal” ballots for the pro-independence candidates.

-Life sentences for political prisoners.
Basque political prisoners Inaki Pujana, Juan Mari Igarataundi and Nicolas Rodriguez saw their sentences extended last week. As it has already happened with another 38 Basque prisoners the three should be released this month but due to a new Spanish government policy, remissions are now applied upon the total of the sentence and not upon the maximum time to spend in prison (30 years until 2007 and 40 years since then).

This policy has been seen as a true life sentence which is inconstitutional in Spain.


-Remembering fallen comrades.
200 people attended the annual Basque volunteer’s commemoration in the Aritxulegi Mountain. Despite Spanish police check-points people gathered to remember the 225 militants who have died in the last 40 years.

In Pasaia, near Donostia/San Sebastian the Basque-Spanish police attacked those who gathered to remember four Basque volunteers who were ambushed and killed by the Spanish police 25 years ago. 25 years on and nobody has been ever charged for these killings.

New details have emerged surrounding the case of the disappearance of ETA member Pertur in 1976. Italian fascist militants currently in jail were questioned last week by a Spanish judge. They said that around that time they had a house outside Barcelona were they prepared operations against ETA members who were in the north of the Basque Country. They used weapons given by the Spanish secret services. The Italian fascists told the Spanish judge they heard from other fascists about a Basque volunteer who was kidnapped, tortured and killed and then disappeared in 1976 but couldn’t remember the name.
Posted by Irish Basque Solidarity Committees at 8:11 am No comments: