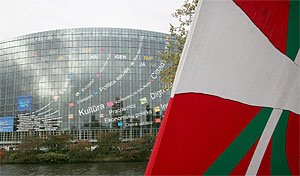 The analyses of some other processes on their way to be resolved have something in common and this is the need of international support so the process can go on. Euskal Herria obviously is not an exception. For so many years, may be for too long, there has been not even a remote possibility for a negotiated resolution of the conflict. At an international level only the cruelty of the conflict was exposed. The Basque pro independence left-wing has non stop trying to make known that it has always been a political conflict, and as such, that it needed a political solution.

But this political sector had very restrained means to socialise this message between the people. Both states immersed in the conflict, this is, France and very specially Spain, have made use of all the resources they had to distort the message of the pro-independence left-wing, making the people believe that they were dealing just with terrorists who were endangering democracy. The lack of international implication in the former process at the end of 1990 was the key for the total failure of it.

This time though, things are changing. In Euskal Herria there is some sort of strategy going on, which is over the political parties, it does even exceed them. There are some national organizations being created: National Forum for Debate, Democratic Base Agreement, Udalbiltza (this is a net of Basque majors and councillors), Ahotsak (a women organization in which the political party they belong to is not taken into consideration and their aim is to mix different sensibilities) and some others.

We are offering in this report a general view of all the movements that are taking place at this very moment.

At the end of July, Ahotsak was invited by Les Verts to the meeting they do organise at Cautances in Normandy. One of the representatives from Palestine committed herself to make Ahotsa's initiative known in Palestine and Israel.

· On the 30th of August Friendship (Association constituted by groups within the European Parliament) hold a meeting in Brussels in order to start the new political year. This Association announced that the European Parliament is to vote a resolution in order to back the beginning of the resolution process in Euskal Herria. According to them: "This resolution has to recognise individual and collective rights of every Basque citizen,whether they live under Spanish or French administration, in order to defend the negotiation. The European parliament should support the Agreement and back the inclusion of all the political trends". Friendship is not happy about the delay in the constitution of the political parties' table in Euskal Herria. They asked the European PP (European conservative party) to support the resolution that is to be voted. ·

On the 2nd of September, Regions et Peuoples Solidaries (Federation which has between its members French political movements including EA and PNV) passed a resolution asking the French government to "contribute with the political normalization of Euskal Herria". ·

On the 11th of September Alex Maskey, member of Sinn Fein, hold a meeting in Madrid along with another member from Batasuna and asked the Spanish government to support a process for the resolution of the conflict. ·

24th of September at the Zinemaldia, the international cinema festival held in Donostia, many actresses from different countries of the world backed the initiative Ahotsak. According to them "peace is much more than the lack of war and violence and in the same way when women are listened to, some aspects that in another way should be ignored, are definitely included in the peace processes".

28th September. The European Parliament analysed the proposal and it agreed to debate on the 25th of October its participation in the conflict between Euskal Herria and Spain. That proposal was finally approved on the President's Conference. The proposal was made by the Socialist Party. As for the Popular Party it did the support the proposal, even if their party mates in Spain did not do so. In their words "the initiative is a disparate and a historic mistake the aim of which is to make ETA happy, since ETA's aim consists in making the conflict international. The wider and more relevant the debate is the happier that ETA will feel" (Spanish spokesman of the PP in Europe). "There is nothing for debate but for condemnation" (the president of the Spanish PP party).·

Batasuna was happy with the decision by the European Parliament "A decision of great importance since it is the first time that happens in this kind of context. We are within a process that is happening in the European context; we do consider foreign presence something really important." According to Basque president Ibarretxe: "The decision of the debate places the process in the world agenda". The Base Democratic Agreement group, a plural Basque collective working for the internationalization of the process, does consider the agreement a historical opportunity. ·

On 3rd of October Tony Blair made a short visit to Madrid, something that was understood as his personal support of the negotiation process. He mentioned that "It is always worthy to try". He announced his will to back the process he even gave a piece of advice to the Spanish president, Zapatero: "In order to face these sort of processes a patient determination is essential; if someone believes on what he is doing, he keeps on". At the same time he was very critic with the Spanish PP's obstructionist policy. ·

On 9th October. Six world wide known men did openly support any democratic resolution of the conflict. The former presidents of Italy and Portugal Francesco Consiga and Mario Soares respectively; the ex-candidate for the presidency in Mexico Cuahtemoc Cardenas, the peace prize winner Adolfo Esquivel; the leader of Sinn Feinn, Gery Adams and the one of the African National Congress, Kgalema Mothlanthe.

Finally on the 25th of October a debate took place in the European Parliament with hundreds of Basque pro-independence supporters rallying outside. A motion in favour of a democratic process in the Basque Country was passed with 321 votes in favour and 311 against.
Posted by Irish Basque Solidarity Committees at 12:12 pm 1 comment: